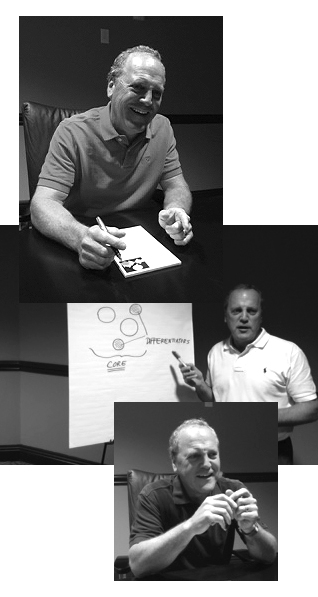 Researcher studies ‘humans in the wild’ to figure out what sells
Cheryll Hall, The Dallas Morning News / Sunday, November 6, 2005

Dwight Fletcher studies primates in their native habitats, just as he learned at Harvard University. But these days the creatures he monitors walk upright and eat pizza rather than swinging on jungle vines and foraging plants.

Five years ago, Mr. Fletcher left Tracy-Locke/DDB Needham to start Spearfish, a marketing research firm that taps into buyer mindsets on their turf – at home, in the office, at the mall or in the drive-through lane.

“At Harvard, I discovered that animals are much more dynamic and complex than most people think,” says Fletcher, who earned a degree in primate biology from Harvard and an MBA in marketing strategy from the University of Texas. “Now I study ‘humans in the wild,’ where they make the decisions that make or break marketers’ hearts.”

In his big agency days, Mr. Fletcher created branding and marketing initiatives. “What I missed was that ground-level contact with consumers.” So even though he has a staff of five, Mr. Fletcher conducts all interviews and focus groups. A video producer captures the encounters so that Mr. Fletcher can study body language and tone. You see, it’s not about collecting raw data, he says. It’s about grabbing the message.

Alex Louis, vice president at Interstate Batteries, turned to Mr. Fletcher two years ago when his company was setting up battery centers inside Elliott’s Hardware stores. “The consumer told us they didn’t know what a battery center was,” says Mr. Louis. “The research indicated we needed to go back to a more basic approach with a simpler message.”

Because of confidentiality agreements, Mr. Fletcher can’t put names with specific projects – but you’ll get the gist.

He spent six Wednesday and Friday nights at a national pizza chain restaurant, calling customers back after they placed an order to find out why they wanted that particular pizza on that particular night.

He also asked about the package deals that most had declined and discovered that there’s a $20 ceiling for pizza delivery or carryout.

“Pizza companies are adding all of these extras – two large pizzas, 10 wings and two liters of soft drinks – to get the tab up to 30 bucks,” says Mr. Fletcher. “They think it’s great. Consumers don’t.”

He found a big difference between showstopper hues – like the metallic orange Corvette that had everyone buzzing – and what people say they’d actually drive.
“That’s why you don’t see that many orange cars on the road even though it’s the big hot color,” says Mr. Fletcher.

As with most of his on-the-spot interviews, Mr. Fletcher forked over $10 to people for 10 minutes’ worth of opinions. “That’s all I need. They’re not there to talk to me. They’re there to enjoy the show.”

He paid physicians in Baltimore and San Jose for 10-minute interviews about why they referred to certain radiology clinics.

The doctors were amazed that he asked his five questions and left. Mr. Fletcher could be speedy because he and his client, Radiologix Inc., a Dallas medical imaging company, had honed the questions to zero in “decision-critical” factors.

Paul Streiber, vice president at Radiologix, says the company learned that the most vital link was “the relationship between our front desk and the referring physician’s front desk. We knew this was important but didn’t understand the critical depth of this.”

And that means patients get a complaint-free experience, reports are quickly returned and insurance claims are hassle-free.

Mr. Fletcher also talked with passengers at Dallas/Fort Worth International Airport and Chicago O’Hare and came up with more than 100 new names for American Airlines Inc.’s Bistro Bag. But the airline killed the meal in a sack instead of renaming it.

Rather than bring strangers in, Mr. Fletcher recruits one person who fits the marketing profile and asks that person to invite seven friends, neighbors, peers or colleagues, who also fit the same profile.

“Traditional focus groups are nothing more than studying animals in captivity,” he says. “Mine are very relaxed. In the first five minutes, I’m ready to go. In the normal situation, it takes 45 minutes for the group to warm up.”

“I find exactly the opposite,” Mr. Fletcher says. “They’re more honest because they know each other so well. Strangers put up pretenses.”

“Look at teen purchases at a McDonald’s drive-through. They know exactly which mix of products get them the most food for the least money, and it’s not the ‘meal deals.’ ”

And companies try to make themselves look smarter by using marketing jargon.
“One client talked about an ‘instant, risk-free incentive device.’ I finally realized what he meant was a friggin’ coupon.”